In July, my friends Mellie and Rel informed me that they were thinking about doing a shortened, all women version of a triathlon, and asked if I would like to give it a shot too. I was impressed with their drive and ambition, and wondered if I had the same. I hemmed and hawed, going back and forth in my head about it.

I talked to Nathan about the idea, told him my pros and cons about it. The cons didn’t even phase him; he was totally for it, and even agreed to train with me for it.

Suddenly, I was signed up for a triathlon and had 4 months to train. YIKES!

The first month sped by fast without a lick of training being done, except for some swim coaching by my lovely husband (he was a swimmer. I’ve seen the evidence. ie team pictures). Our pool at our apartments is not quite the lap pool one needs to train for a triathlon, though. So with 3 months left before the big day, Nate and started our own version of training, being joined by Mellie and Chad and Phil and Rel a couple of times.

One Saturday at the end of July or the beginning of August (I forget) Nathan and I went out to Mission Bay to do the entire length of the triathlon: 1/4 mile swim, 6 mile bike, 1.5 mile run. Up to this point, the most consistent exercise/training we had ever done was a 2 mile run during our Couch to 5K training. This was nothing like that.

The swimming was by FAR the most difficult, for many reasons:

A. I’m not a “swimmer.” I don’t really know what that means, but basically I haven’t ever done any real swimming; I’ve just splashed around/floated on the water.
B. Salt Water – gross. Just gross. It is not fun to swim in.

The place where we trained was part of the bay; the water was calm, the grass was green, there were ducks and other birds in the water. You know what it looked like?

I forgot EVERY TIME that it wasn’t a lake, for three months. It’s not fun re-discovering that when you take in a mouthful of salt water. Blech.

The first run was TOUGH. I cried at the end. BUT, we finished it. And that was the confidence booster I needed to continue training for this crazy thing.

We continued doing the full distance on Saturdays, and on Wednesdays we would head out to the same place and do half distances. Wednesday nights were fun – afterwards, we would go out to eat at Chik-fil-a. Yum. Those calories tasted oh so good after training!

So, for about 3 months we kept up this routine. Swimming was coming a little easier, though I knew it would still be the hardest part of the race. By the time the tri came, though, I was ready.

The Saturday before, the 6 of us (me and Nate, Mellie and Chad, and Phil and Rel (we have VERY supportive husbands! Thanks men!)) went to South Shores Park to pick up our race packets, sit in on a course talk, and get body marked. Yep, there were volunteers there to mark us with our bib number and wave number with permanent markers.

We found out that the three of us were in the same wave, which was awesome. We were a little worried that we wouldn’t be, since all the participants are broken up into waves of about 75 women. It was great to know we’d be starting out together.

The Course Talk was so necessary. It calmed my fears about the whole thing. The other calming part was the number of first time triathlon participants. We were all in the same boat, and it was getting exciting.

The next morning, Nate and woke up at 4am to get my gear together and head down to the park again. Transition area opened at 5:30am, and the Course Talk presenter mentioned that the earlier one gets their transition set up, the better race they generally have. So we got there at 5:30am on the nose. I got my transition set up, met up with Mellie first, and then Rel came and got her transition set up. We were ready to go!

Our wave was set to go at 7:41am. There were 1200 women participating in this triathlon, with 16 waves total. The first 10 waves were of women doing the Sprint – double the distance that we were doing. One of the participants with the silver medalist in triathlon at the Olympics; she ended up finishing in 53 minutes or so. In fact, she finished when we were in the water!

Our turn came. I was nervous. Swimming with 74 other women was going to be a lot different than just swimming with Nathan. One cool aspect of the tri was that they offered “swimming buddies” – volunteers who could swim along with you and offer emotional support if you needed it. I didn’t have one myself, but ended up keeping pace with someone who did, and just listening to the guy encourage someone else was encouraging for me.

The water was 70 degrees – didn’t feel cold at all. We got in, the horn blew, and we were off. I finished the swim in about 17 minutes.

Transition, and next came the bike. This was BY FAR my favorite part of the tri. For the first bit, I was able to catch my breath from the swim and start to focus. After I had done that, I was able to pick up speed; I started saying to myself, “Let’s see if I can pass them,” and started passing people on the course. I ended up making up time on the bike; so much time, that poor Nathan missed me come in! Park the bike, time to run.

I’ve learned in training that I am much more a long distance runner than short. I feel like I finally get into my groove around mile 1 or so. The start of the run was a little rough. I grabbed a glass of water from a volunteer, and ended up with water all over myself! Next time, I ‘ve got to master the art of drinking and running!

Round the curve, water station, half way done! This is when I started to kick it into gear. Round the curve, finish line! Mellie had already finished, and was there when I crossed it. Rel was close behind me. We had done it!

We met up with our AWESOME cheering section (Nate, Chad, Phil, of course, and also Matt, Brad and Amy who got up at the crack of dawn to come cheer us on! Thanks guys!), grabbed some fruit, and gave a play by play from our perspectives and heard it from the cheerleaders. It was a fun day.

Though I was wary going into it, I have to say I’d do it again. It was a great time training with Nathan (he’s a great coach!), and it was a great race. Below are a few pics of the day. 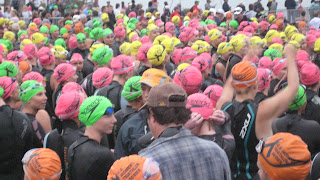 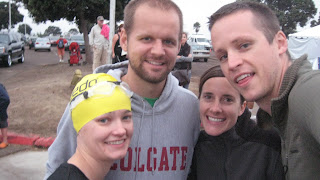 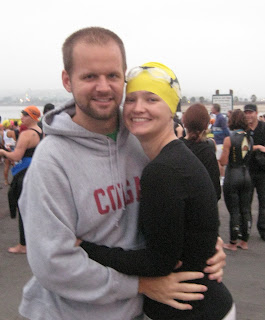 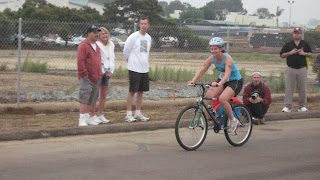 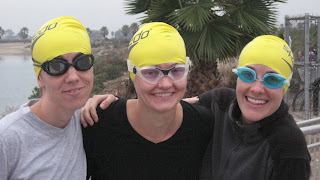 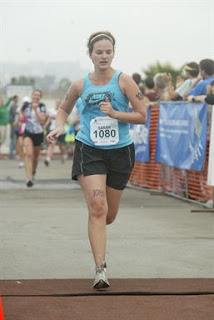 Big thanks to Nate, who pushed and encouraged and coached and put up with my breakdowns during the training. I couldn’t have done it without you!

This entry was posted in Uncategorized. Bookmark the permalink.